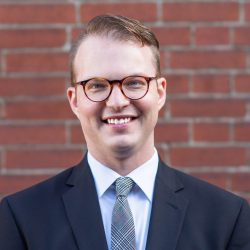 Justin Reinking joined the General Youth Division in January 2017. Before coming to St. Louis, he was privileged to serve as a member of the Oklahoma Youth Department. He was blessed to serve the OK Youth for nearly 10 years, serving as Sectional Youth leader, Senior Bible Quiz Coordinator, Youth Secretary, and Oklahoma District Youth President for six years. Justin was a full-time Youth Pastor in Dewar, OK for 10 years serving under Pastor Matthew Martin at the Dewar United Pentecostal Church. Justin is an ordained minister of the UPCI and believes in this generation of Apostolic youth. He met his beautiful bride, Kimberly, while traveling in Oklahoma and their relationship grew while attending Indiana Bible College together from 1999-2003. In July 2001, they were married and have three handsome boys: Noah, Elijah, and Micah. The family enjoys sports in the backyard, game nights, and family walks. Justin enjoys running and basketball, and he considers himself a Reuben sandwich connoisseur (see Shapiro’s in Indy).